Eric started his career volunteering at a local boarding kennel in St. Louis, Missouri when he was 15 years old. He continued as an apprentice for their training program and instantly fell in love with dog training. Eric went on to study Animal Behavior at Meremec College in St. Louis and shortly after started Happy Puppy Dog Training. In 2008, Eric moved to Los Angeles to further his career with hopes of shedding light on a more positive, humane, and scientific way to train dogs.  In Los Angeles, Eric worked with dogs and exotic animals alike in commercials, television and film.

In addition to Happy Puppy, Eric also devoted his time to rehabilitate dogs in need, specifically German Shepherds at the Westside German Shepherd Rescue. As a foster parent, he found great joy helping dogs that displayed fearful and/or aggressive behavior pass their temperament tests so they could be placed in a welcoming home.

Along the way, Eric came across an 8 month old German Shepherd who had some behavior issues and unfortunate history. They formed an instant bond and the shepherd was later adopted by Eric. After a rehabilitation period, the lovable shepherd, now named Archy, was playing with other dogs, rolling over for belly rubs and off-leash hiking.

Eric has had the opportunity to see this transformation in many dogs he has worked with throughout his career and has even had the chance to provide his services in the United Kingdom and France. Regardless of culture, dogs learn in the same way all over the world. He continues to learn and his only wish is that we could live more like dogs.

Currently, Eric is an American Kennel Club Canine Good Citizen Evaluator, a member of the Association of Professional Dog Trainers (APDT), and the International Association of Animal Behavior Consultants (IAABC).  Eric is currently a host on the CBS series "Lucky Dog."

Rashi is a social worker with a knack for business and technology. After graduating from Boston University with her Degree in Psychology, Rashi attained her Master’s Degree in Social Work from The University of Southern California. There, she pursued a unique concentration focusing on mental health as well as emotional intelligence and organizational development. This concentration allowed Rashi to utilize her knowledge of behavior and psychology, implementing positive changes in the business world.

After her studies, Rashi worked in the digital and mobile advertising world for over 5 years. In 2014, Rashi met Eric and learned of Happy Puppy and the positive reinforcement training methods utilized. The logic behind these methods were similar to methods she learned throughout her studies.  As she learned more about Happy Puppy, Rashi became fascinated with dog psychology and how it could be applied to human psychology. Combining the passion for behavior and her knowledge of business operations, Rashi soon became the backbone of “Happy Puppy” (and Eric's wife!).

From strategic partnerships and marketing to social media and website design, Rashi is heavily involved in our day-to-day operations, keeping everyone connected. Through her work with Happy Puppy, Rashi hopes to positively impact the lives of animals, just as she hopes to change the lives of others through her social work. Rashi is currently a host on the CBS series "Lucky Dog."

Born and raised in Tennessee, Mike cannot recall a time in his life that did not involve dogs. It started with Amos- Mike's mother adopted a Dalmatian puppy when Mike was five years old. This was Amos, and it's impossible to explain Mike's connection to dogs without talking about him. Amos was one of the main reasons he and his mother embraced a belief that has been at the core of Mike's life ever since:  that family was not and would never be a species-exclusive word.    He continued to become more involved with dogs- pet sitting around the neighborhood and dog walking. It wasn't until his senior year of high school that he became very interested in dog behavior. A special opportunity in his Ecology class offered the next step in understanding: getting to visit a small wolf pack being fostered in the Tennessee Hills around his home. During the visit, Mike finally recognized movements in the wolves that he'd been seeing in dogs for ages.

He volunteered with the wolf pack until they were relocated. Mike also continued to study dogs on his own, but it wasn't until LA that he received the chance to really learn from them again. In 2007, he became an employee of a dog care/training facility in East LA. The job started slowly, but soon Mike was tossed into the deep end. Over the next two years, Mike learned more about body language, communication, and problem solving than he had anywhere else. Each dog presented a new lesson- the most important through-line of them all being Patience. He became involved in rescue efforts ranging from: relocation of rescue dogs to community events stressing the importance of spay and neutering  From 2009 to current, Mike applied the lessons he learned at the dog car facility to more pet sitting and walking, as well as assisting volunteers at his local shelter.

In 2012, Mike was finally introduced to Happy Puppy's positive reinforcement training- and there has never been anything else that made so much sense. He had the great fortune of shadowing Eric for a year. It reinforced ideas he already had while showing new pathways to communication. He currently specializes in the Board and Train Program- taking dogs into his home to give a tailored, one-on-one evaluation and training approach. Currently having no dogs of his own, Mike is free to adjust his environment to whatever his clients might need. While continuing to do Board and Train and Private Lessons, Mike also got his AKC Canine Good Citizen Certification.  He is pursing APDT certification as well as assisting with the RESORT.  Mike has met and helped with challenges ranging from Separation Anxiety to Leash Reactivity, Potty Training to Fear Issues. Amos would be proud. ;) Jose is a biologist and has been passionate about wildlife from a young age. Throughout his course of study, Jose has volunteered, interned, and worked at various institutions educating people and caring for animals.

After completing his Bachelor of Science degree in marine biology at California State University, Northridge he went on to study abroad in Taiwan to pursue a master’s degree. Upon his return back to Southern California, he worked with exotic animals. This experience allowed him to build a connection with different species of animals as well as expand his knowledge toward providing proper nutrition and enforcing positive enrichment.

With his love for animals, Jose is eager to apply his animal care and husbandry experience with different breeds of dogs. Given the opportunity to learn and develop his skills at Happy Puppy, he hopes to foster a relationship with the staff and dogs during his aspiring journey to build a career in animal behavior. He is excited to be a member of the Happy Puppy team!

Hannah is in her third year of undergraduate school at UCLA, pursuing a bachelor's degree in Biology. Becoming a Veterinarian has been Hannah's dream since she was very young and she plans on fulfilling this lifelong dream after she graduates.

Hannah has grown up with dogs her entire life. She's had professional experience with dogs through shadowing veterinary clinics and study abroad opportunities through UCLA. One of the experiences she has been looking for is learning animal behavior in a hands on environment. Happy Puppy L.A. provides the perfect opportunity for her to learn and begin pursuing her career in animal care.  Hannah knows her experience at Happy Puppy will aid her in her endeavor to apply to veterinary school. She looks forward to knowledge she will gain from the staff at Happy Puppy. She's also excited to spend time caring for the happy pups! 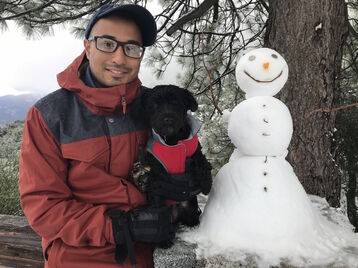